The oldest power station on the River Sog, Ljósifoss began producing power for the city of Reykjavik in 1937. The plant made it possible for homes to stop relying on burning coal for cooking and at the same time, geothermal began to replace heating in the capital.

The Ljósifoss Hydropower Station, the oldest power station in the Sog power station network, began producing power for the city of Reykjavik in 1937. The new electricity supply quickly replaced the use of coal for various domestic purposes. Geothermal domestic heating was also introduced during this period.

The Ljósifoss Hydropower Station was the first of three stations to utilise power from the Sog River. The station was designed by architect Sigurður Guðmundsson in the Funkis style (the Nordic version of functionalist architecture) and Ásmundur Sveinsson created the artwork. The station hosts a state-of-the-art interactive exhibition.

Ljósifoss power station hosts a state-of-the-art interactive exhibition on-site called “Powering the Future” that is open to visitors all year round. 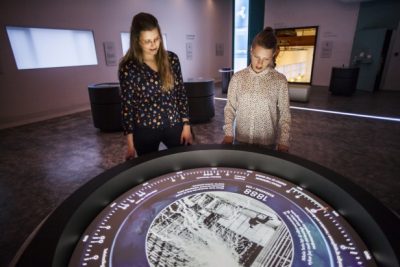 The exhibition offers guests the opportunity to experience the evolution of electricity, through stories of the past, showing just how rapidly this energy source became a necessity in our daily lives. The exhibition is interactive with an emphasis on play and experience where the nature and characteristics of electricity are shown in multiple forms and guests are led through the world of electricity in new and creative ways. The fundamentals of electricity are explained through simple, entertaining and amazing experiments some of which historically led to the many significant steps man has taken in successfully harnessing this energy source.

Guests are also introduced to the renewable and sustainable energy generation methods used by Landsvirkjun such as hydropower, geothermal energy and wind energy. Landsvirkjun is entrusted with the task of utilising these natural energy sources and employs a large team of experts to ensure that the Company remains at the forefront of renewable energy generation. Energy generation and energy utilisation are shown in a wider context and the development of energy worldwide is assessed by considering important factors such as renewability and sustainability.

Landsvirkjun believes in an integrated approach where prudence, reliability and the harmony of operations with the environment and society are fundamental to our operations.

Iceland generates almost 100% of its electricity from renewable energy resources and Landsvirkjun generates 75% of this electricity.

The Ljósifoss Hydropower Station is one of Landsvirkjun’s 14 hydropower stations. The station celebrated 80 years of operations in 2017 and is still going strong. The utilisation ratio of the station that year was approximately 97.5%, which means that the turbines at the station were active for 357 days. The station was off-line due to maintenance and inspection for a total of 7 days and experienced only one day of unplanned interruption.

Energy shortages were common in Reykjavík in the 1930s and the electricity supply from the Elliðaár Power Station became inadequate. The station struggled to supply enough energy for domestic use, street lighting and basic industry. The Reykjavík City Council quickly realised that the Sog area could potentially provide a solution.

The decision to build the first Sog station was not taken until 1933 because of various political upheavals and fears of a looming world crisis. The station was designed to supply the City and its neighbouring areas with energy. The company ‘Sogsvirkjun’ was subsequently established by Reykjavík City. The City was initially the sole owner of the company but the state was given the option of acquiring rights to future stations.

The station was mostly constructed by hand and construction proved challenging. Two 4.4 MW turbines were installed and the Ljósifoss Power Station came online in 1937. Initial calculations showed that the station would provide enough energy to meet demand for the next 7-8 years but the Second World War created a new energy crisis. The second phase of the power project was completed in 1944 when the total energy supply was increased to 15 MW.