Placed on steep island cliffs about 250m above sea level, in demanding mountainous terrain with little vegetation, Havøygavlen wind farm is under constant battering from adverse and rapidly changing weather conditions. The wind farm truly epitomizes the saying, “that which doesn’t kill you makes you stronger”. The internal roads are only accessible by snowmobiles during the winter season, and the nearest community is that of Havøysund, a small village of around 1000 inhabitants, primarily focused on the fishing sector. Here in the Arctic Circle, the midnight sun illuminates the island during the summer months, while the darkness is all-consuming during the winter period, only brightened by the spectacular aurora borealis. Being set in one of the world`s most vulnerable areas to the effects of climate change, Havøygavlen presents an option for supplying clean, renewable, and perpetual energy, necessary for all development in the region, and therefore a responsible choice.

The world’s northernmost wind park proved to be a valuable testing ground for arctic sites and now demonstrates high economic efficiency. The extreme environment has been an overall educative effort for both the developers and the turbine makers, who recently chose to upgrade the wind farm after almost 20 years of successful operation.

In 2002, a wind park of sixteen wind turbines was erected on the bluff above the island’s only town, Havøysund, a remote fishing and shipbuilding outpost which was not connected to the mainland until a bridge was opened by King Olav V in 1988. Due to extreme conditions at Havøygavlen, the wind farm had to go through several modifications and the replacement of its components. Another challenge of this project was the transportation of spare parts and maintenance crews to such a remote location. Nonetheless, the wind park was a success, being one of the first major wind parks with large turbines of 2,5 MW at the time.

When Statoil took over in 2009, it was decided that Havøygavlen would be a development park for turbine technology and operations models. Step by step, the turbines were overhauled from top to bottom. From the outside, the N80s looked the same as when they were installed, but the technology inside had been radically altered. The turbines’ software systems had also been re-engineered for the extreme environment on the northern island. Back in 2004, turbine uptime was as low as 72% and averaged under 85% in the project’s first ten years. In 2012, however, the rate was above 95%, close to the industry benchmark of 97%.

The knowledge gained at Havøygavlen may prove indispensable for a series of large wind farms planned across Norway’s northernmost region of Finnmark, and is a priority for Finnmark Kraft AS, who bought Havøygavlen in 2011. Its importance has already been demonstrated through the establishment of Hamnefjell wind park, a facility close by, and the progressing importance of developing renewable energy in the region.

In 2019, Finnmark Kraft AS entered into a partnership with its owners to initiate a re-establishment and upgrade of Havøygavlen wind park. The previous 15 Nordex turbines had supplied power in the region of Finnmark for almost 20 years and thus come to an end of their life-cycle. Therefore, the turbines were replaced by new Vestas turbines, allowing for the efficient re-use of already established infrastructure, as well as the further production of clean energy for the next 30 years. 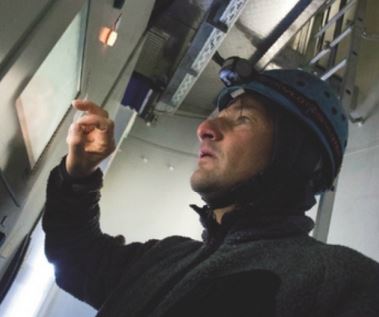 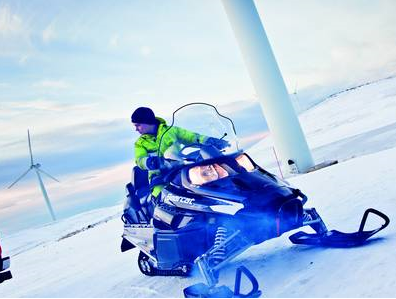 Havøygavlen wind park is one of the best locations for wind in Europe. Previously, the site with its fifteen Nordex N80 turbines and one Siemens SWT-3.0-101 turbine demonstrated its high economic efficiency. With an average wind speed of more than 9 m/s in the hub height of 80 metres, the wind park had a capacity of 40 megawatts generating up to 120 GWh of clean electricity per year. This was enough to service between 5,000 and 6,000 households in Norway, and about 10% of the generating capacity of a modern gas power plant.

Since its official re-opening in October 2021, Havøygavlen wind park now consists of 9 new Vestas V117 4.2/4.3 MW turbines and 1 Siemens SWT-3.0-101/3000 kW turbine, with an annual combined output of around 135GWh. The Vestas turbines are 150m high, while the SWT-3.0-101 wind turbine is 131m high, blades included. The large rotor blades of the Vestas turbines are able to produce energy at wind speeds of up to 32m/s, while the Siemens turbine is able to produce energy at winds speeds of up to 25m/s. Learning from many years on-site, Havøygavlen is now home to modern and updated turbines, created to withstand the natural forces of northern Norway, while efficiently delivering clean energy for many years to come.

Conquering the Arctic since 2003

The residents of Havøysund see Havøygavlen as a positive thing, with the wind park being regarded as a major landmark on the island. The wind park has furthermore created several benefits for the community, introducing industrial investments of several hundred million Norwegian Kroner (NOK) to the local municipality. Havøysund Patentslipp, a ship repair and engineering company established in 1935, has been an early beneficiary of work on the turbines, being contracted to carry out various jobs including coating the previous 80-meter towers with anti-corrosion paint. Indeed, the upgrade of the wind park was seen as a hugely positive development, with the mayor of the municipality, Bernth Sjursen, stating that the wind park and its further expansion has created several local jobs during both the operational and developmental phases, giving local businesses a chance to seize the opportunities presented. Now, the local workers have the necessary skills to work on other wind farms that are being developed in the area.

Another business that has been helped by the wind farm is the 93-bed Havøysund Hotel, which relies largely on custom from the fishing boats — some of which come from as far away as Canada and West Africa. According to hotel director Logan Karthigesan, 35% of trade has been “Havøygavlen-related” — which has made a major difference in a tough business climate.