Eólico Las Peñas is a Chilean wind farm located 12 km to the west of the city of Arauco, in the middle of an eminently forest sector. The onshore wind farm has 4 wind turbines of 2.1 MW each. Eólico Las Peñas has had a significant impact on the emissions of energy consumption of the communities living around the area (the city of Arauco, Caletas de Tubul, Punta Lavapiés, Llico and Las Peñas, and the indigenous communities of Raqui Chico, Nine, Loma Larga and Pichillanes). The plant generates annually the equivalent of energy consumption of these cities, replacing the energy generated from coal with clean and renewable energy.

Las Peñas wind farm is a partnership between Cristalerías Chile, Chile’s leader in the manufacture of glass containers, and Parque Eólico Las Peñas, the startup company that developed the green field research project.

The social and environmental impacts 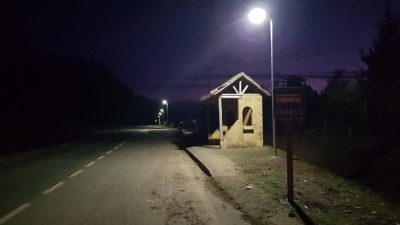 New pergolas for a viewpoint to the protected area

Regarding local employment, Eólico Las Peñas has signed an agreement with the Municipality of Arauco undertaking to favour the hiring of personnel from the area as well as coordinating visits with students to the park to spread the generation of energy by renewable means.

Close contact has been maintained since the development stage of the project with the Raqui Chico rural-indigenous community living few kilometers south of the plant. The population is distributed on the banks of the main route to the plant and until June 2020 it did not have any type of road lighting. Eólico Las Peñas contributed with  Raqui Chico community by installing streetlights throughout an important inhabited sector – see pictures below.

The power plant is located to the northeast of the Tubul Raqui coastal wetland, a protected area with impressive biodiversity and incredible beauty. Eólico Las Peñas developed a viewpoint towards the wetland that includes a rest area and 3 pergolas with an infographic explaining the landmarks that can be seen from the place. The gazebo was released to the public in june 2020 – see pictures below.

During the development process of the wind farm, impact studies were carried out on flora, fauna and social environment. As a result of the analyzes carried out, a wind turbine was relocated to avoid influencing the migratory routes of birds, some species of reptiles were relocated and they were followed up for a year after relocation. Additionally, in the construction process, a geolocation of Copihues, Chilean national flower and protected species, was carried out and 10 plants were planted for each plant that could be affected by the construction.