The Civil war in Burma is labelled as the longest ongoing civil conflict in the world, dating back to the aftermath of the second world war. 70 years on internal conflict has had a devastating effect on the country, and the country and especially the border region has seen severe human rights violations, war crimes and crimes against humanity.

As a result of the prolonged ethnic conflict, and the the systematic attacks on ethnic minority civilians, around three million people are thought to have fled their home country. Due to the close proximity, hundreds of thousands have fled conflict and persecution in eastern Burma to neighboring Thailand.

Mae Sot is a small Thai city just a few kilometers of the Burma border where a garbage landfill has been the settlement place for 500 refugee families. 50% of this community are children from different backgrounds. Unstable and inadequate access to electricity – forcing the local community to rely on natural light – has contributed to children’s lack of education access and uncertain future.

Social struggles facing most migrant communities in Mae Sot are magnified in the landfill community, such as:

Green Island, a collaborative project, is a refugee community centre based in the center of the landfill aiming to provide educational support and activities to the children – giving them the opportunity to play and form friendship regardless their background, empowering them and ensuring they stay in schools and out of trouble.

Kinect Energy is supporting the Green Island collaborative project through the installation of renewable energy solar panels to support around-the clock powered activities, enabling unlimited access to education opportunities within the community center, freshly prepared food and safe environment to socialize. The solar panels will also increase safety and visibility at night by powering streetlights in the area.

Additionally, Kinect Energy is supporting the conduction of a survey around the Thai/Burma border to map out needs of solar powered energy.

ABOUT THE GREEN ISLAND COMMUNITY CENTER 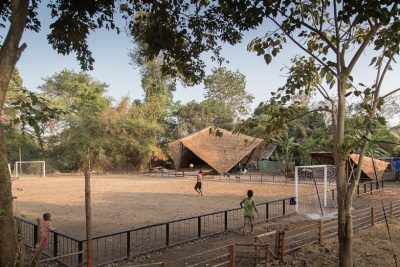 Estudio Cavernas, a social architecture non-profit organization, and PlayOnside, a local sport organization have collaborated to turn an inhospitable/polluted site into the Green Island community centre – a vibrant site with classrooms, football field and vegetables gardens – aiming to foster education for the children and to empower the community.

The Green Island centre provides educational support, offers recreational opportunities for locals and promotes a culture of gender equality by encouraging girls to an active part of the community.

Activities run by PlayOnside such as:

From October 2018 to February 2019, a football field, a community centre and a playground have been built inside the landfill in Mae Sot, Thailand.

Since the opening, Green Island has hosted a summer school, regular weekday’s football training, extracurricular classes, football tournaments, movie nights and friendship games with other migrant schools. It has brought vibrancy and life into the garbage dump, and has become a place the community as a whole enjoys. Green Island has also participated with four different football teams in the PlayOnside tournaments Mingalarbar Mae Sot League, and Rainy Season Tournament. All in all, the project has developed really well so far.

Solar-powered electricity for 3 of the communal buildings surrounding the new football field. 2 panel systems was installed by Htoot Htoot, an experienced project manager. By mid-November, the installations were finished and powering from 100% clean and renewable energy the different PlayOnside activities.

Keeping the community involved in the project – solar training with handbooks – essential for long term maintenance of the system.

Since construction of the community centre, 30 families have build their homes nearby – reinforcing the original concept of local ownership and belonging. The Green Island has taken on a symbolic meaning for the community who are united through a central space that represents the community’s identity and shared vision for their own development. 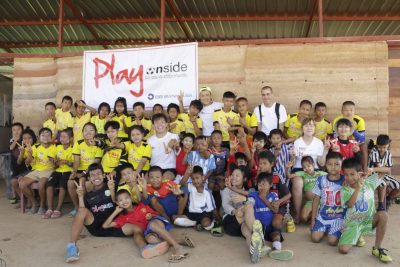 Football as a tool for gender equality, social inclusion and empowerment

PlayOnside was founded in 2013 and has grown to be one of the most influential sports organizations on the Thai/Burma border. PlayOnside believe that football has a tremendous potential to promote social change. Through a long term, sustainable and flexible approach, PlayOnside is bringing playful learning activities to displaced Burmese migrant children in Thailand.

PlayOnside gives access to education through high quality football and life-skills play for children regardless of ethnicity, gender, religion or socio-economic status in all migrant learning centres on the Thai/Burma border.

PlayOnside objectives are the following: