Sarp hydroplant harnesses energy from the powerful drop of Sarpsfossen, Europe's largest waterfall with a rich history that dates back 700 years in time.

With a drop of 20.5 meters and a catchment area of approximately 41 200 sq.kms, Sarpsfossen is known to be the largest waterfall in Europe measured by water flow. It is the last waterfall in the longest and largest river in Norway– Glomma. But more impressively, the story of harnessing energy from Sarpsfossen dates all the way back to 1312 and is part of the proud Norwegian heritage where hydropower has played an integral part in developing the wealth of the nation.

Sarp power plant is the largest of three power plants that utilize the energy from Sarpsfossen- others include Borregaard and Hafslund. The decision to construct Sarp powerplant was taken in 1974 in order to utilize flood water flow in the lower Glomma. This represented a further expansion of Sarpsfossen that increased intake capacity of 450 m3 /s without any major infrastructure development. In 2009, a substantial reinvestment was made at Sarp to install a new control system, new main transformer and conduct a generator audit.

In Norway,  hydropower is often referred to as “family silver”—and the story of Sarpsfossen hydropower is a perfect embodiment of the phrase. 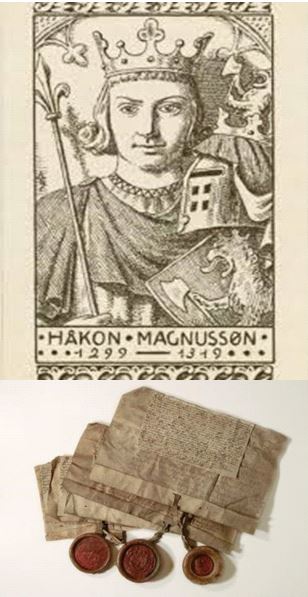 King Håkon Magnusson & his letter from 1312

Ever since the Viking era, when King Olav II Haraldsson founded his new capital Borg (today Sarpsborg) in 1016 next to the waterfall, it has been tightly intertwined with Norwegian economic history. On January 13th 1312, King Håkon Magnusson gave the royal residence of Borregaard to Hafthor Jonsson and as a result the Borregaard estate was established.

The gift included the farm and the property rights to the Sarpsfossen waterfall in the river. In the gift letter (pictured on the left), which is still preserved in Norway’s National Archive today, the King stated that the river and the waterfall should be utilized to their full potential. This statement proves that even at that time, people already understood the potential of water energy as an invaluable source of power.

This piece of history was almost lost when a landslide in 1702 triggered a flood that raged into the Borregaard. The only thing the owner at the time managed to salvage from the building was an iron studded trunk. It contained some silver and some important documents like the letter from the King Haakon V Magnusson from 1312. This trunk with its contents is in exhibit today at Borgarsyssel museum in Sarpsborg. The documents and the gift letter are stored at Norway’s national archive.

Electricity was first produced from Sarpsfossen in 1892 for a pulp mill which had been built by the waterfall. 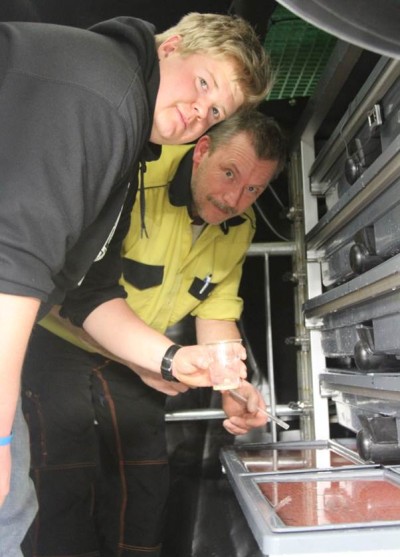 In 2011, power plant owners of Sarpsfossen donated a total of 6 million NOK (approx. $765000) to establish salmon hatcheries to boost the population of Glomma Salmon.In October 2012, state-of-the-art hatcheries were open just below Sarpsfossen, for a total investment of 9 million NOK. The Lower Glomma and the District Fish Management operate the facility together.

In addition to providing financial and operational support, the power plant owners also assist in releasing the salmon into the Sarpsfossen waterfall.